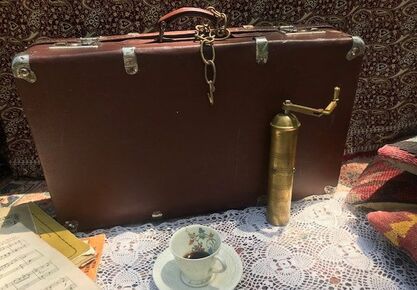 
​THE STORY
The Suitcase/Der Koffer is a New Music Theatre work for three performers (mezzo soprano, piano and saxophone), exploring the contents of a suitcase given to a woman by her father. She left her home country as it was about to break apart, and now the suitcase is filled with memories and history and the residue of a life in movement. The soprano will be our guide, in English, through the stories revealed by what she finds in The Suitcase. The pianist and saxophonist are also involved as storytellers and improvisers, their own stories mingling and commenting on the central narrative. Prerecorded sound material, including the voices of children in many languages, bring us fragments of other stories, other cultures, other suitcases. The project was originally conceived by the composer, and we are drawing on documents, events, and stories from her life, including her departure from Belgrade (then Yugoslavia) as a student: when she left Belgrade at the age of seventeen she never imagined she would live in eight different countries on three different continents. The narrative is firmly rooted in the composer’s life experiences, and we are constructing the text from many of these found documents. There will also be original text: stories and events woven into this narrative from other displaced lives and cultures. An unprecedented 68.5 million people have been forcibly displaced, worldwide, as nearly every two seconds sees another person driven from their home, according to the UNHCR (United Nations Refugee Agency). Over half of these displaced people are children. This work seeks the connections and contrasts among some of those displaced.

THE PERFORMANCE
In developing the style of the performance, as well as in various elements of the music composition, we are influenced, in part, by the New Music Theatre approach of Mauricio Kagel. Kagel applied instrumental thinking and aesthetics to the theatricality of both music composition and performance, weaving stage directions directly into the score and celebrating the live elements of the performance. Jovanović studied with Kagel in Germany, after leaving Belgrade, and we are both fascinated with his musician’s approach to theatrical performance. So this is neither strictly a concert nor an opera nor performance art nor standard theatre, but is influenced by all of these forms. Consequently, the direction and text are developed in intimate relationship with the composer, and with the music.  The sound material combines acoustic music, musique concrète, sound effects, electronic sound , New Music Theatre, instrumental improvisation and multilingual text. As my personal commentary to Kagel’s radiophonic piece Erratische Blöcke cell phone also becomes a musical instrument, and introduces the prerecorded text [read by children] in Serbian, Croatian, Montenegrin, German, English, Hebrew, Ukrainian  and Greek. Both prerecorded and live spoken languages are used as an audio art form where the melody and rhythm of the words are equally important as their meaning. The musicians are asked to become the storytellers, a visual interpretation of the music score, and to spontaneously react to the soundscape. Neither concert, nor opera, nor play, nor performance art The Suitcase/Der Koffer is influenced by all these forms, as three performers present objects, documents, events and images from the lives of the displaced, real and imagined.

THE TEAM
Ljiljana Jovanović (concept and music) is a composer, New Music Theatre maker and sound designer with over thirty years of professional experience. Her principal music teachers include Željko Brkanović [music composition], Ulrich Süße [musique concrète], Mauricio Kagel [New Music Theatre/Composition] and William Kleinsasser [electronic sound]. In 2002 Ljiljana also completed graduate studies in interdisciplinary theatre at Towson University, Maryland. She participated at the 2. Tonkünstlerfest Baden-Württemberg, Rheinisches Musikfest, Documenta IX and MusikTriennale Köln festivals, and was part of The Creator "pro-active, mentoring and cross cultural" TV production in Vancouver, the GEDOK Music Series in Cologne and Women Between Worlds and New Roots, multi-disciplinary and multi-cultural documentaries directed by Exsul van Helden. Awards and grants include two residencies at the Banff Center for Arts and Creativity, Meet the Composer Grant and the first prize for an abstract radiophonic form Modi’in by Radio Belgrade Drama Program, Serbia. In 2018 Modi'in represented radio Belgrade at the Prix Palma Ars Acustica , Prix Italia, and Karl Sczuka Prize festivals. Ljiljana’s New Music Theatre projects, chamber music, texts, site specific soundscapes and installations and sound designs, have been performed throughout Europe, Canada and US. She is a member of the Baltimore Composers Forum and is listed in Adkins Chiti Foundation: Donne in Musica. This fall her Modi'in [Part I] will be performed at New Music DC 2019 Conference. She is multilingual, and writes primarily under the professional name Jovanović.

Juanita Rockwell (direction and text) is a writer and director of new work, with over one hundred projects produced on five continents. Projects include plays with and without songs, chamber opera, monodrama, audio theatre, promenade performance, dance theater, puppetry, translation/adaptation, gamelan opera and site-specific performance installation. Recent projects include writing the libretto for Backwards from Winter, a monodrama for soprano, electric cello, video and computer, with composer Douglas Knehans, which premiered at Symphony Space, NYC in May 2018. A second production was presented in June as part of the acclaimed Dark MOFO festival in Hobart, Tasmania. For six years she was artistic director of Hartford’s Company One Theater, directing professional premieres of work for stage and radio by America’s leading experimental playwrights. She is professor emerita at Towson University, where she was founding director of their interdisciplinary M.F.A. in Theatre, a rigorous laboratory environment training the artist-asproducer of original performance projects. Awards and grants include the Marion Fellowship in the Visual and Performing Arts, a Rubys Artist Project Grant, a Fulbright fellowship in Costa Rica, and funding from the National Endowment for the Arts and National Public Radio. Artist residencies include: Ucross Foundation, The Studios at Key West, Virginia Center for Creative Arts, Playa Foundation, and a Scientific Delirium Madness residency at the Djerassi Resident Artist Program.

Allison Campbell (Scenography and puppets) has designed the sets, lights or costumes for eighty productions. In the Baltimore/DC area she has designed for Source Theatre, Single Carrot, Metro Stage, Baltimore Shakespeare Company, and the Theatre Project. From 1987 till 2001 she was co-designer at New York's Obie award winning children's theatre, The Paper Bag Players, where she created sets, props and costumes, fashioned out of paper, cardboard and found objects, for ten original plays. Her work is included in the company's repertoire. She is and Associate Professor at Goucher College where she teaches designs and directs. Her puppet work has been seen at The Black Cherry Theatre and the Akimbo Festival

Chris Roberts [mezzo soprano] is a retired Professor of Theatre from Stevenson University after 35 years of teaching. She has directed and performed in numerous plays and musicals. She is a professionally trained mezzo soprano and continues to solo at various venues. She worked in television with her late husband for over ten years and won numerous awards including an Emmy. She earned her MFA from Towson University. Chris and Ljiljana collaborated on Chris’ MFA project, The Yellow Wallpaper - composer Ljiljana Jovanović, director Chris Roberts. The following is a list of shows that Chris directed and Ljiljana musically directed : Oh What A Lovely War, Cabaret, The Threepenny Opera and Once Upon A Mattress.

Duo Crveno’s primary focus is on the contemporary improvised music through an exciting game of sounds, noise, motion, action and reaction. They search for new timbres through extended instrumental techniques and preparations, and by becoming both the  sculptors of compressed air through un/prepared saxophone and by utilizing found objects and instruments in the tradition of the arte povera . As part of other improvisational duos and trios they have performed at the festivals throughout Europe, South America and Asia most notably at the esteemed Irtijal Festival of Experimental Music Beirut, Lebanon in 2012 and at Audio Art Festival Kraków, Poland in 2017. Duo Crveno’s arrangement of traditional city songs from Bosnia, Serbia and Croatia  called Tragovi was premiered in Toscana, Italy in 2014, and subsequently performed in Belgrade [Serbia] and Cologne [Germany] as an audio visual installation concert together with the works of the visual artist Irma Markulin. This will be their fourth collaboration with Ljiljana but the first one where their improvisational practices will become an integral part of the soundscape.

Georg Wissel (Alto Saxophone) refers to himself as a sculptor of compressed air through un/prepared saxophones. He made his first important experiences in the improvised music in the late 1980 while recording and touring  in Germany, France and South America as a guest musician of Pöhlmusik along with Jon Rose. Inspired by his collaborations with electronic sound musicians, he also began searching for new timbres by working on extended instrumental techniques and preparations which have since become an integral part of his playing. He works internationally with many of the most significant artists in improvised music. He performs as a soloist under the name The Art of Navigation; as a long term collaborator in various duos (with Paul Lytton, Joker Nies and Tim O'Dwyer); in two trios (The WISSELTANGCAMATTA and CAJLAN-WISSEL-NILLESEN) and in a German-Belgian quartet (Canaries on the Pole). Georg has appeared in festivals throughout Europe, South America and Asia. His work is documented on CDs and in various radio productions worldwide. Furthermore, in counterpoint to his dedication to improvisation, Wissel also composes original works inspired by his fascination with geography and geometry.

Dušica Cajlan-Wissel (Piano) was born in Zemun (Serbia). She studied piano with Marian Mika at the Music Academy in Podgorica (Montenegro), and completed her graduate studies with Günter Ludwig at Musikhochschule Köln in Germany where she received a German DAAD scholarship in 1993. She participated in master classes with Elena Richter, Arbo Valdma, Leonard Hokanson, Pierre-Laurent Aimard and Anatol Ugorski. She started her concert career in 1986 playing solo and chamber music, and in 1996, turned more to contemporary music. She is cofounder of Trio Musai whose repertoire places a strong emphasis on commissioned pieces alongside the works of the modern classical repertoire. The highlight of Trio Musai’s work was the 2013 Sound Migrations  concert tour to the US where they premiered a full program of commissioned works by the Baltimore Composers Forum. In recent years, she has focused more on improvised music, including her performance at the esteemed Irtijal Festival in Beirut in 2012. Cajlan-Wissel continues to perform in an improvisational duo with violinist Gunda Gottschalk and a trio with Etienne Nillesen and Georg Wissel.

Facebook page
This project is supported in part by :